The highs and lows of our first training ride together

The highs and lows of our first training ride together

Our first joint training ride started well with a bright sunny morning.  The team assembled and was ready to go at the appointed time. There were a few nervous faces ahead of the 70 miles which we planned to tackle that day, by far the longest ride many of us had ever undertaken, but we were excited to get going.

However, our optimism faced an almost immediate set back.  Before we had even left Blackbrook Business Park we noticed that we had already lost one of our number, Chris Francis.  Surely Chris could not have lost heart so early on in the ride?  I was sent back to investigate and found the unfortunate Chris standing helpless beside his newly purchased bike, which now had a snapped chain.

With nothing any of us could do to help him, we set off again without Chris, leaving him to try to get his bike repaired.

The route saw us wind our way through the Somerset lanes and villages towards Weston-super-Mare.  We encountered a few hills early on, but once we had these out of the way it was a largely flat route, ideal for getting some miles, and confidence, under our belts in the early stages of our training schedule.

After a brief stop for assorted refreshments overlooking the civilised setting of Weston-super-Mare Croquet Club, we set off again, having been re-joined by Chris, who had managed to repair his bike and join us in Bleadon for the return leg. 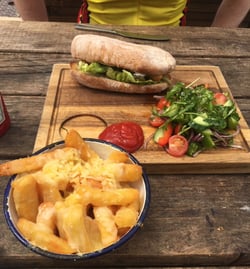 Some of the riders were dubious about the concept of stopping for so long, and would have preferred to push on rather than risk their muscles stiffening up.  I, however, felt rejuvenated by the generous lunch Merlin bought for me (having failed to bring any cash myself) and flew through the next 15 or 20 miles.

Just as I was discovering the joys of drafting behind my teammates, which seemed to make cycling on the flat effortless, while they did all the work shielding me from the wind resistance, poor Chris hit another set-back, a puncture.  Thankfully a replacement inner tube was fitted and after 30 minutes of wrestling with a stubborn wheel, we were back on our way.

With tired legs and the energy from those cakes seeming like a long time ago, the final few hills as we approached Thornfalcon appeared hard work. It was with great relief that we crossed over the traffic lights before taking to the lanes for a relatively gentle final few miles.  However, the beleaguered Chris was to have one final set back: a further puncture on the same wheel.  Having already used his spare inner tube, and with only 3 miles to go, he was left with no option but to slump into a layby and wait for one of us to drive back and rescue him when we had finished the ride.

All in all, it was a great ride, and fantastic to get a longer distance under our belts. Although we had our fair share of incidents, I am sure these will all be good practice for the rides ahead.  Thankfully, Chris wasn’t put off by the whole experience and Laura seemed to show no remorse whatsoever for having sold him the bike in the first place!

It was a great experience riding as a team, and the pain was made all the easier to bear, knowing that all was in support of the RNLI and raising funds for the great work they do saving lives around our treacherous coastline.