With the day of our ride fast approaching, many of us are trying to strike the balance between getting in plenty of last minute rides, but without wearing our legs out before the big day. Scott, Merlin and I thought a midweek ride would provide just that balance.

We set off from Poundbury towards the coast and completed a loop of around 28 miles, which we thought was pretty good going with just a few hours of daylight to work with. We were met with a glorious evening and treated to some fantastic coastal views when we reached the coast road.

A theme for the ride seemed to be Scott and I lagging behind somewhat, resulting in tedious waits for Merlin at junctions.  As a payback, Merlin decided to hide round a corner and leap out at us when we approached (Merlin is an unusual man).

However, what Merlin didn’t realise, was that Scott and I had been overtaken by what can only be described as an elite peloton of riders, with all the expensive gear imaginable and a physique that showed they took cycling rather more seriously than us.

It must have been a surprise for them then, as they approached a small Dorset village only to be accosted with a loud ‘Boo!’ from what they must have assumed was a rather disturbed local man, leaping out at them, who obviously needed to be taken back to whatever institution was tasked with looking after him. Needless to say, they peddled on out of the village rather quickly after that.

When Scott and I finally arrived on the scene, the surprise shout from Merlin was a slightly more timid one.

All in all it was a good training ride with some challenging hills to make up with the lack of distance.

Pictured here is Merlin at the lifeboat station in Lyme Regis. He doesn't look as if he'd say Boo! to a goose... 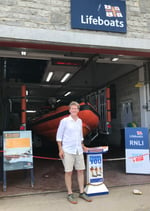 Porter Dodson has further strengthened its employment law offering with the appointment of two new associates into the Employment Law Team, Sarah Cook