Why I am riding to raise funds for the RNLI

Why I am riding to raise funds for the RNLI

I feel the 5th September is creeping closer now and negative thoughts are starting to sink in. So was I absolutely crazy to sign up to the Porter Dodson Charity cycle ride? Only 120 plus miles of varying gradients between our offices and all in one day!

I only took up cycling after selling my horse in 2016. I like a challenge and decided to give the 2018 Watchet to West Bay C2C a go. It went better than expected and after that I took part in the Woman V Cancer London Night Ride and The Princes Trust Palace to Palace ride (Buckingham Palace to Windsor Castle) the same year. By then I had the bug and went on to take part in the C2C again this year.

Riding for charity makes it even more worthwhile and the idea of raising money for the RNLI with our latest challenge does appeal. 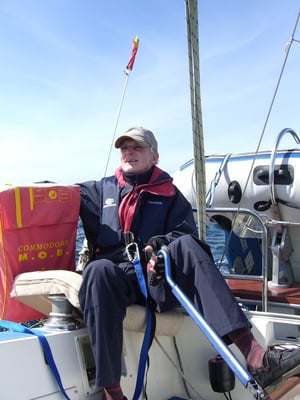 I lost my father in 2016 to Cancer and, as you can see from the photo, was a keen sailor and would definitely be supporting me with this challenge. I can remember at least one hair raising trip with him in rough seas between the Channel Islands. We came close to needing the RNLI ourselves! Well dad would disagree but I was absolutely terrified. After six hours looking at a vertical horizon and experiencing the boat fall from enormous waves, I have huge respect for the work the RNLI carry out and the risks they take.

My other drive is a member of our team, Emily Stott. Emily lost her brother in September 2006 whilst surfing off Watergate Bay in Newquay. He had suffered an epileptic fit and after being pulled ashore by two surfers, he was resuscitated by the RNLI. He was then airlifted to Treliske Hospital where he later passed away.

‘Jimmi’ was Emily’s older brother and best friend. While he never regained consciousness Emily is clear that if it was not for the RNLI, she would never have had the opportunity to spend time with him before he passed away.

Emily has raised over £11,500 for the RNLI purchasing a much needed Rescue Water Craft and is a huge inspiration to me.

Well back to training with another long ride planned this weekend. Please dig deep and support this fantastic charity to allow them to continue their great work in treacherous conditions saving countless lives.

Porter Dodson recognised for delivering an exemplary service to clients

Porter Dodson is delighted to be recognised in the Devon and Somerset Law Society (DASLS) Regional Awards 2020 for Corporate Social Responsibility...

Porter Dodson has appointed a new associate to the Dispute Resolution Team. Helen Williams joins the firm with more than 15 years’ experience in the...