What are the grounds for divorce?

What are the grounds for divorce?

This blog post relates to previous divorce laws. On 6 April 2022, the Divorce, Dissolution and Separation Act 2020 was implemented, heralding no-fault divorce. Read more in our blog post: No-fault divorce – the end of the blame game

Under the law of England and Wales, a divorce cannot be applied for until a couple has been married for one year. There is one ground for divorce, which is that the marriage has irretrievably broken down.

People often think that it is enough to say that there are “irreconcilable differences” within the marriage. However, unless a couple has been separated for a period in excess of two or five years, they sadly do need to allege blame on the part of their husband/wife to obtain a divorce.

Under current divorce law, in order to prove that the marriage has irretrievably broken down, the Petitioner needs to use one of five reasons.

Grounds for divorce - the five facts

The Petitioner needs to satisfy the Court that the Respondent has committed adultery and that he/she finds it intolerable to live with the Respondent.

Adultery Petitions can be used if the Respondent admits his or her adultery, otherwise it may be difficult to prove this and an unreasonable behaviour Petition can be issued instead.

It is possible to name the third party involved as the Co-Respondent but this is usually discouraged. Doing so can make the proceedings more acrimonious and drawn out.

The Petitioner needs to show that the Respondent has behaved in such a way that they cannot reasonably be expected to live with them.

The Divorce Petition must include examples of the Respondent’s unreasonable behaviour during the marriage. These can include serious or relatively mild allegations of behaviour.

Usually, the allegations of behaviour have no direct bearing on how financial or children matters are resolved. Therefore, it is better to try to keep things as amicable as possible.

It is usually good practice to send a draft Divorce Petition to the Respondent for consideration before it is sent to the Court in order to try to avoid the Respondent defending the proceedings.

Find out more about the divorce process

The Petitioner needs to show that the Respondent has deserted him/her for a continuous period of at least two years.

Desertion Petitions are rarely used because usually one of the other facts applies.

Where the parties have been separated for at least two years, a divorce can be granted on this basis if the Respondent consents to the divorce.

Where the parties have been separated for at least five years, a divorce can be granted on this basis without the Respondent’s consent. 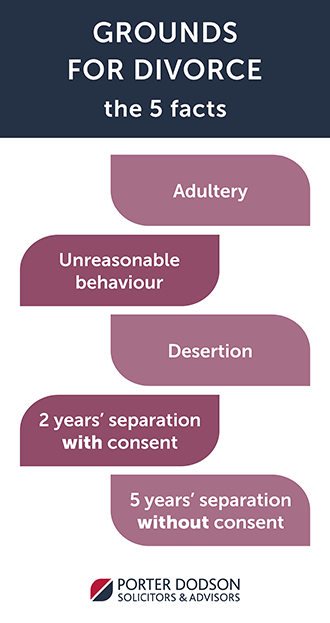 Unfortunately, the current law does not assist those couples who have simply grown apart through no fault of either party and want a divorce before they have been separated for two years.

In recent years, there has been much talk of reform towards no-fault divorce. It has recently been announced by the Government that the Divorce, Dissolution and Separation Act 2020 will finally be implemented on 6th April 2022.

The family law system has increasingly encouraged mediation and negotiated agreements in relation to children and financial matters over recent years. It appears that in April 2022 our divorce law will catch up with that way of thinking. This long overdue change will enable couples to divorce mutually without blaming each other, assisting them to separate in the most amicable and non-confrontational manner possible.

Read more: What is a clean break order in divorce?

Our family lawyers can help you

If you would like to discuss whether you have grounds for divorce, please contact our Family Law Team who would be happy to advise you.

We have specialist family lawyers to advise on all aspects of relationship breakdown, including divorce and civil partnership dissolution, financial settlement after divorce, and child custody and support.

Are you considering getting a divorce? Download our free guide and find out the six key decisions you need to make.

For legal advice on Family law

Marriage is certainly on the decline. Data from the office for national statistics shows that the latest marriage rates are the lowest on record....

No-fault divorce – the end of the blame game

On 6th April, radical changes to the law on divorce came into force when the Divorce, Dissolution and Separation Act 2020 was finally implemented.