The 'Tryhard Ten' Prepare for the 'Great Eight'

The 'Tryhard Ten' Prepare for the 'Great Eight'

A bike repair masterclass took place last Wednesday for the 'tryhard ten' taking on the ‘great eight’ office cycle challenge on 5th September in aid of the RNLI.

It was considered likely that in pedalling 121 miles in one day across our eight offices in Somerset and Dorset and back in Somerset again we might encounter bicycle mechanical issues along the way such that we would require some bike repair know-how.

So we organised some tuition from expert 'Cycle Dave' to avoid what might otherwise be a sponsored bike pushing walk.

Of course, it is also likely we might encounter rider mechanical issues along the way. But we haven’t thought of tuition for that. I am thinking perhaps about applying knee straps; a bum cushion fitting; or operating a defibrillator.

80% of the tryhard ten gathered at 6pm sharp to gain the knowledge and technical know-how of cycle Dave.

I don’t know what cycle Dave does for a day job but if he is interested in working with children animals or the behaviourally challenged I am more than happy to give him a glowing reference because the calmness he showed over 80 minutes getting us to change two tyres was quite something.

I am pleased we are not having to cycle the length of his patience because we might have to do that over two days.

I think cycle Dave instantly got the measure of what he was having to deal with when two of the attendees to the bike repair lesson didn’t even bring their bikes and another didn’t bring a toolkit.  Perhaps, Dave thought, these clever lawyers could simply absorb the information from his indoor demonstration and apply said knowledge just as quickly and easily on a windy rain soaked roadside verge at dusk at mile 94.

If he did think that, he only thought it for a second when he saw how the group met the challenge of putting on disposable black gloves. Some of the group were searching in the box for left hand gloves.

First demo was the changing of the inner tube in the front tyre. We gathered round to watch.  Cycle Dave whipped off the wheel and replaced the inner tube, refitted the tyre and pumped it up seemingly in one move. It was quick and elegant and graceful. Real Formula 1 pitstop stuff.

“Yeah we got that, Dave; looks quite easy really”

Ok, well, now it was our turn.

We returned to our bikes eager to crack on and do just what we had seen.  Well, at least those of us who had thought it would be a good idea to bring our bikes.  Barnaby hadn’t brought his bike so he shared mine.

We replicated what cycle Dave had showed us. But in slow motion. Over about 35 minutes.

Cycle Dave had a track pump with a pressure gauge to get the tyre back up to its required pressure.

The tyre pressure for my bike is 100psi . Remember that fact because it is relevant to what happened later.

Cycle Dave did another demo for the back wheel which took him about two minutes start to finish.

Back to our bikes we went to apply what we had just seen, which was more complicated because of the gears and refitting of the back wheel, etc

Since I had done the front wheel it was only fair Barnaby should change my back wheel. 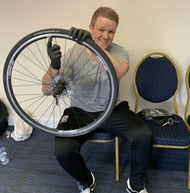 went in. Easy. Refitting of tyre. Not so easy. In fact, bloody difficult. Imagine, trying to stretch a penny piece into a copper wire. I think every male in the room had a go at trying to get that tyre back on. Each successive tryer thinking he was the one to do it, whilst the one who had gone before him trying to exlain how he had probably loosened it for him. Eventually cycle Dave had a go. He managed to get it back on. Of course he did. I don’t think the men liked him as much after that. I was honestly secretly hoping he, too, would fail so I could have another go. But he didn’t fail. Once refitted, he handed the wheel back to Barnaby in a sort of father to son sort of way (he didn’t pat him on the head though, or ruffle his hair).

Barnaby now just had to use the track pump to pump the tyre back up. Remember what I said about the tyre pressure? I reminded him of the required tyre pressure. Seeing him on that pump, however, I realised perhaps how upset and frustrated he was at not getting that tyre back on. He was pumping like a piston. It looked like he was having a mini workout. The vein in his temple was like a hosepipe. I called out my reminder about tyre pressure but he wasn’t listening. My bike was practically levitating due to the air in the tyre. I think he would have floated away like the crouchy old bloke in the Pixar film UP! but for the fact that the inner tube at that moment gave up and burst with the sort of bang you imagine hearing on a battlefield. Everyone dropped to the floor. Chris, who had been standing nearby anchoring my floating bike, burst an ear drum. When the rest of us thought it was safe to do so we got up off the floor and began picking fragments of inner tube out of our hair.

In the immediate aftermath and after some of us had been counselled for shell shock, Barnaby was arguing in true lawyer style how it wasn’t his fault and that the pump gauge hadn’t shown he was up to the required psi. I’m sorry but I don’t buy that at all. Not one bit. That’s like the Boston Strangler blaming his murders on his gloves.

Cycle Dave then said that was the end of our session. I don’t know whether he had covered all he intended to. Perhaps he figured he wouldn’t have time to get through it all before he had to be at work the next morning

Many thanks to Anusheh for giving me her spare inner tube (so cycle Dave could fix it all up for me) because in case I didn’t mention it ..ahem.. I was the bozo who didn’t bring his toolkit and spares.

We hope we are all now prepared for a big bike ride. Not long now. Just a couple more practice rides, at least. Hopefully there will be no more surprises. The big bang at least tested our heart attack resilience so perhaps at least I won’t need to carry the defibrillator on my back for the ride.

We will however have to learn sign language to communicate with Chris.

For legal advice regarding dispute resolution

Porter Dodson recognised for delivering an exemplary service to clients

Porter Dodson is delighted to be recognised in the Devon and Somerset Law Society (DASLS) Regional Awards 2020 for Corporate Social Responsibility...

Porter Dodson has appointed a new associate to the Dispute Resolution Team. Helen Williams joins the firm with more than 15 years’ experience in the...