The ever-popular event, which sold out in less than a week, raises funds for the Dorset and Somerset Air Ambulance. Porter Dodson was again delighted to be one of the sponsors. The 56 mile route, from Watchet Harbour on the Somerset coast to West Bay on the Dorset Coast, takes in some glorious scenery and fortunately the weather was kind enough for the riders to enjoy the views.

Phil shares his experience of the event: 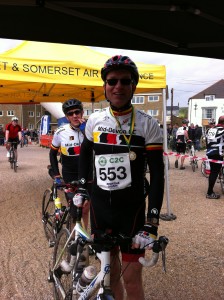 “This is a lovely route which I was delighted to be riding for the second year. I even managed to persuade a number of friends from my cycling club to join me on the ride this time! The event attracts riders on all types of bikes – I was passed by someone on an electric bike and was tempted to ask her for a tow up the hills!

“There were quite a few team entries, the most distinctive of which was a group of men wearing tutus! For me, that summed up the day: a spirit of fun, with a collective dedication to the cause of raising funds for the charity. That and the wonderful array of cakes at the feed stations, plus the smiles and cheers of those lining the route, carried us all on to the finish line, where a sense of personal and collective achievement awaited us all. I’ll be signing up again next year!”

Paula Whitehead, Events Manager at Porter Dodson, gives her view on the day as a spectator:

“There’s something very rewarding about standing at the finish line of the Dorset & Somerset Air Ambulance Coast to Coast cycle ride with a handful of medals, waiting for the first cyclist to complete the 56 miles from Watchet to West Bay… 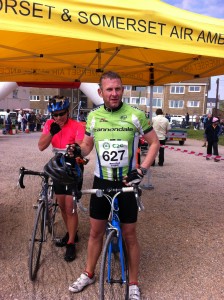 “The event is wrapped in a camaraderie, with staff from all the sponsoring firms banding together to set the scene, sharing flasks of warm drinks as the wind whips in from the coast. After 2¾ hours, the first cyclist arrives to cheering and cowbells, followed closely by a fellow cycling team mate. The rest of the 600 cyclists come through in waves, young and old alike, some families, some cycling clubs and some enthusiasts.

“Two members of the Porter Dodson team arrive in quick succession. Phil Stocker, completing the course in a none too shabby 3 hours 38 mins, with Stephen Wray hot on his heels, crossing the finish line 19 minutes behind him…”