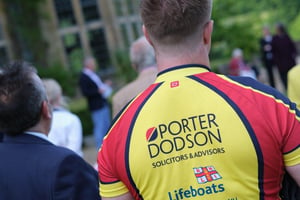 September in aid of the RNLI, I was slightly concerned about parading round in our fluorescent yellow cycling gear in such esteemed company and at a beautiful location such as Minterne House – but, all for a good cause.

With the incredible cars on show and an impressive demonstration from a Longbow world champion, I could be forgiven for forgetting about the raffle which would end the evening’s festivities. As hosts of the event, Porter Dodson representatives were not given a raffle ticket. Fortunately, I found myself a loophole.  As the names of winners were read out I was asked to place the tickets of two guests in the hat as they had forgotten to enter the raffle! I was assured that the prizes won would be split 50/50 as payment for having to run through the crowd to enter their names in the draw.

I was pleased then to hear that I would be able to split the winnings of a Fortnum and Mason hamper with a very generous couple.  As the raffle drew to a close I was shocked to hear that my other entry had also won the prize from Sally’s Fish Camp.

My haul included; shortbread, champagne truffles, an apricot preserve and a jar of piccalilli which I smuggled out in my pocket!