What could be better than to make history bringing Thomas Hardy's favourite cheese back to life? That's exactly what the Davies family did, overcoming butter mountains and milk floods and involving the whole family in their business at Woodbridge Farm.

When did you start your business and why?

Dad resurrected Dorset Blue Vinny Cheese in the 1980’s when there were milk floods and butter mountains.  He had trained as cheesemaker at Cannington and so one of his friends suggested it as a way of using up our surplus. He bought a second-hand vat and with help from a local farmer’s wife, he got started.  The first batch was matured in the pantry, and everything went blue, the cheese, the walls, the marmalade, everything!

All our cheese is made with milk from our own dairy herd, which takes up around 30-35% of what we produce.  Any that is left goes to Barbers to produce more cheese - cheddar!

I don’t have a background in food, I’ve just learnt on the job. My godmother, Wendy Horne, helped with our first batch of soup and it’s grown from there.


What’s your favourite product and what makes you and your product special?

A few years ago, a local fruit grower, Elwell Fruit of Bridport, had an excess crop of Packham Pears, which resemble a cooking pear.  He offered them to us and we turned them into chutney and that’s how our chutney business was started.  We also acquired some wonky sweet cucumbers that one of the supermarkets didn’t want, and we pickled those.

Our favourite has got to be the Dorset Blue Vinny though.  It was Thomas Hardy’s favourite cheese and it’s rooted in the heart of Dorset. The cheese matures at the farm for 15-18 weeks.

We have a pop up shop and we sell the offcuts from the 6 Kilo truckles of the DBV, and it’s always the offcuts that sell first.  We have introduced some labels that we use in rotation with neat 'cheese facts' on them.

What's your relationship with Porter Dodson?

We first met through Porter Dodson’s FAB (Dorset), a forum for food and beverage producers. Since then, they say they see us everywhere!


Tell us about a notable challenge/success

The weather can have an effect on the cheese, together with which cows the milk you use comes from.  Three years ago we started pasteurising the cheese, which helps with consistency.

Seeing where Dorset Blue Vinny is served.  We use wholesalers to distribute our cheese, so it’s not always easy to track where it’s going. We recently found out that it’s being used in 14 branches of ‘The Stable’ restaurants.  It’s been served at the BAFTAS, Twickenham and Wimbledon, as well as in the British Airways first class lounge, which we’re really proud of.

We’ve been visited twice by Escape to the Country.  The first time they saw my father, Michael, and the second time they spoke to my brother and me, which is great as it shows the generations that work on the farm.

Last year, Michael was delighted to be presented with the Dorset Food & Drink Food Hero award.  Rick Stein regards him as one of his own personal food heroes.

Last year we won Gold at the World Cheese Awards in Norway, which is a huge achievement and one we are delighted to add to our Great British Cheese and Taste of the West Awards, amongst others.


What are your plans for the future?

We’d definitely like to grow! You can’t stand still, and we’ve always got a few ideas.

We’ve got no plans to export, although Dorset Blue has been spotted overseas and as far away as Dubai.  We have had enquiries from all over the world, including Australia, New Zealand and the USA.  To deliver to mainland Great Britain, we use an overnight courier service.


What is the best thing about living in Dorset?

Its home, it’s in your blood.

Local food producers from across the South West purchase our cheese to use in their products.  Look for Dorset Blue Vinny in fare from Hotch Potch Pies, Oxfords Bakery, Chococo, Purbeck ice cream and Holbrook’s in Sturminster to name but a few.  Some of them make products for us to sell in our pop-up shop, so why not stop by and take a look?.

A note from the author:

We love discovering restaurants, pubs and eateries that serve Dorset Blue Vinny.  One of our favourite pastimes is spending a summer’s evening at Winyards Gap on the way to Beaminster, tucking into an Ultimate Share Ploughman’s’ whilst taking in the breath-taking views! 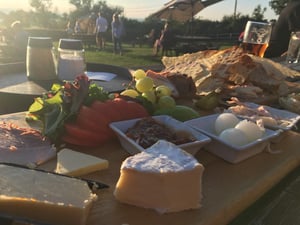 Last week we were delighted to relaunch our FAB (Dorset) forum at the Shire Hall in Dorchester.

Local businesses, with an emphasis on those in the...