Well, a week has now passed since the Porter Dodson Pedalers completed the DSAA C2C cycle challenge. Firstly, I have to say that parading past my colleagues at the Firm's Communication Day in my cycling top to have a team photo taken was far more traumatic than the ride itself!

After four and a half months of training, and certainly feeling fitter than when I started, the day was actually here… I now had to do it!  The weather could not have been better and the atmosphere was fantastic as we set off out of Watchet, uphill (only the first of many!). I knew the first stage of the route very well, having done it several times during my months of training, but what I was not prepared for was how much the cyclists would become spread out along the route, particularly after we passed Bishops Lydeard. For my part, I am very grateful to Phil for sticking with me and supporting me along the way, which definitely helped to make it an enjoyable experience. The scenery was beautiful and everyone was so friendly.  It was great to have taken part in such an event and completed it.

Despite enjoying the ride, and it really was not as bad as I had envisaged, I was very glad to get to the finish line and see the smiling faces of the members of Porter Dodson who were there to greet us…thank you all so much. 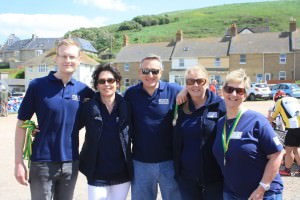 I would also like to thank everyone, both my fellow team members and other colleagues for the words of encouragement and support leading up to the event. Many have asked, would I do it again? Well… we will see! One thing I do know is that I now have the cycling bug and can’t wait to get out on my bike in the evenings and at the weekends.

If anyone is thinking of doing the event next year, my advice would be, go on give it a go, it’s a great way to get fit!

Porter Dodson has further strengthened its employment law offering with the appointment of two new associates into the Employment Law Team, Sarah Cook

Porter Dodson, has been ranked once again in Chambers UK (2022).

The 2022 edition sees the Family Team being ranked again in band 2, with mentions...